Select a type of your journey

Matsuzaki Shoten: Vintage military shop watching over the transition of the neighborhood

--How do you acquire products for your store?

(Kazuo Matsuzaki, owner of "Matsuzaki Shoten") Our store is registered with the U.S. military, so all our military products are sourced from bases within Japan. We receive asset disposal notifications from the government administration, which can include products that are no longer used, those with defects, or products that are being replaced after 20 years despite never being used.
We source our products from Misawa, Sagamihara, Iwakuni, Okinawa, and Sasebo. Okinawa is very far, so I've only been there once or twice, mostly just for fun. There are only a few days to respond to a disposal notification, so during that time business people from all over Japan visit the base and bid, and the winner receives the goods. 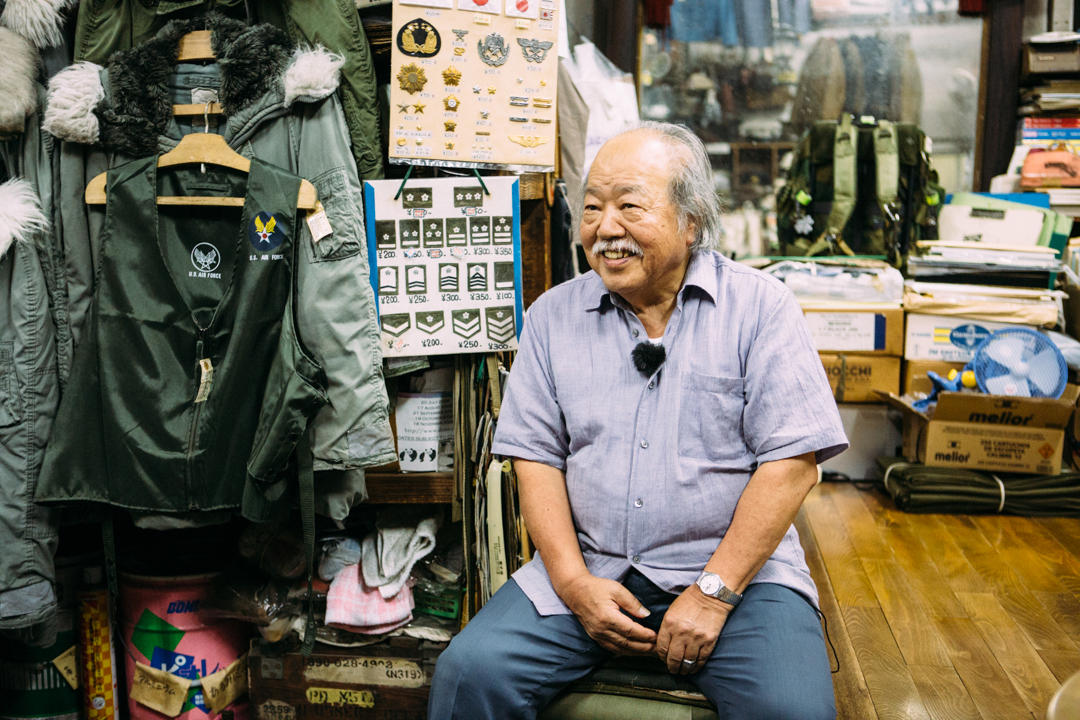 --What sort of customers do you typically see?

In the old days we didn't do any retail sales, and only sold wholesale. Used clothing business people would come from all over Japan to source their products from us. These days we see mostly military fans. We've been in business for a long time, so sometimes they come from very far away. Sometimes I get a call asking, "Are you open on Sundays and holidays?" one day, and then they actually come the next day, meaning I can't take all my Sundays off. We're not a rental clothing store, but we do see many clothing and prop shop operators. 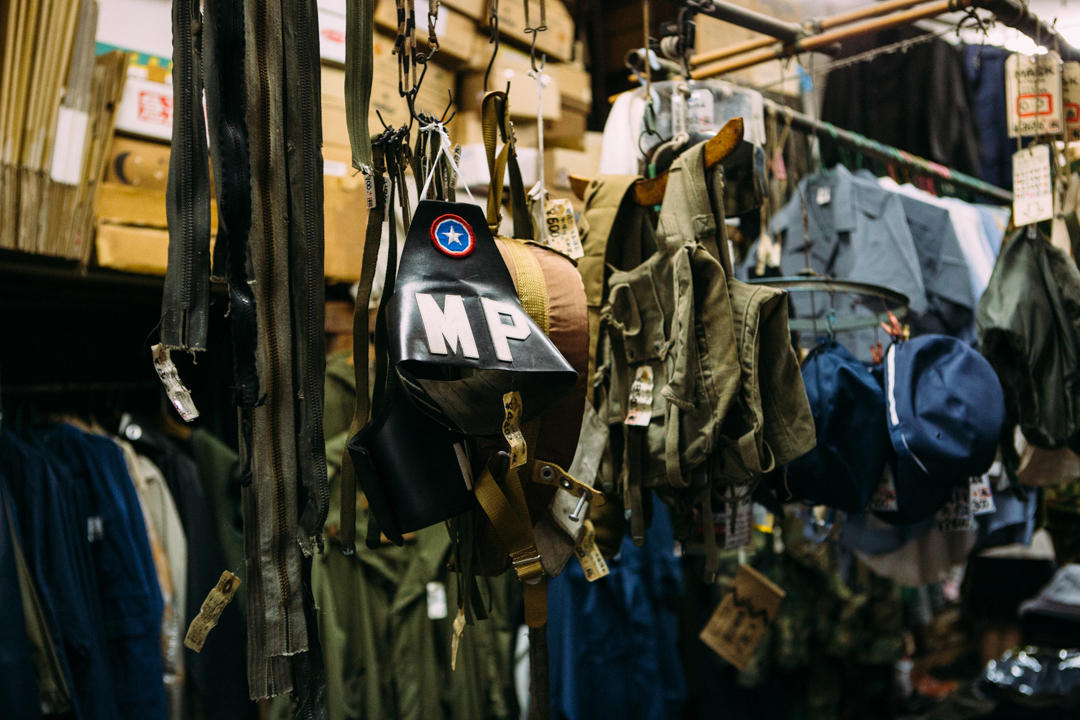 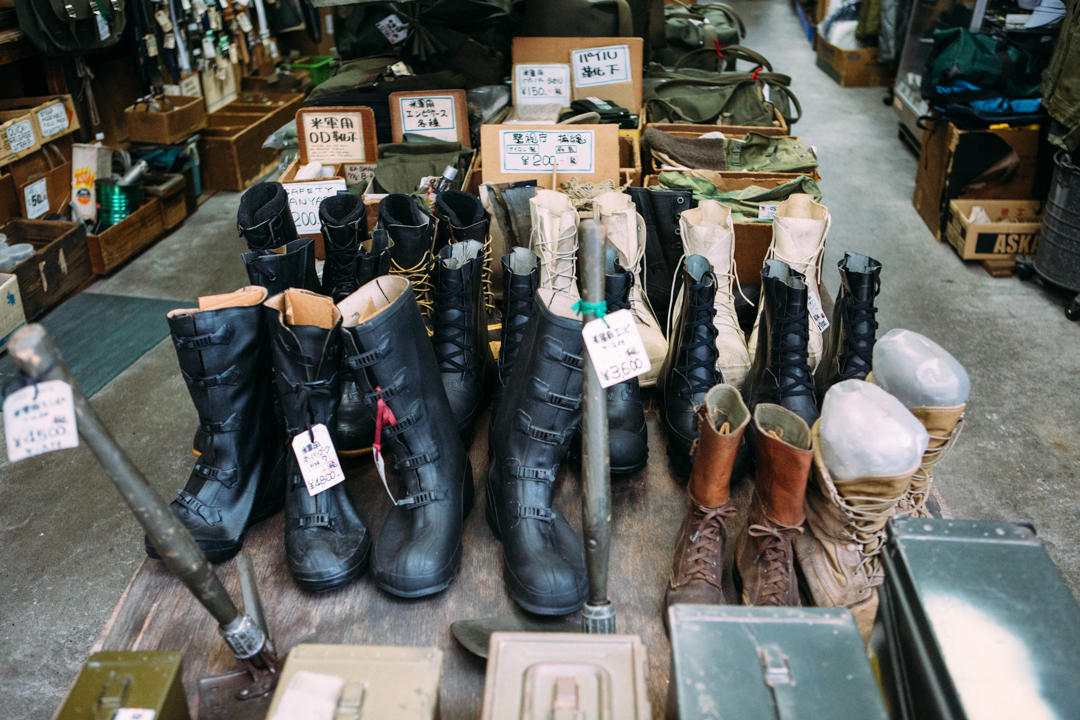 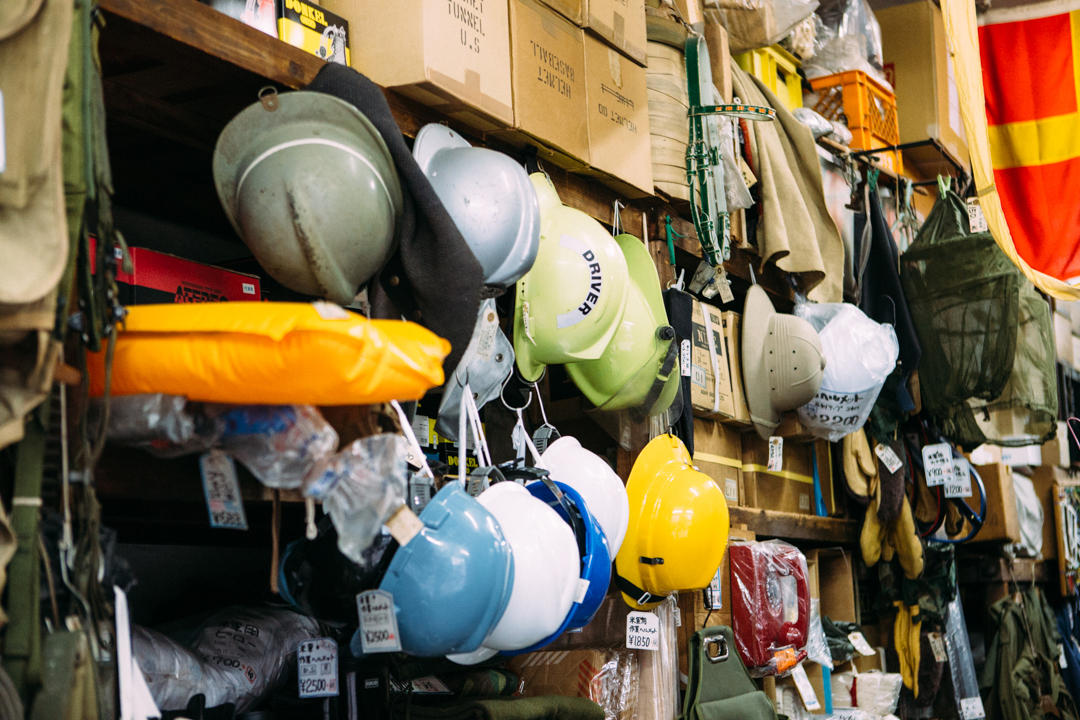 --When did you start working at this store?

I started just after I graduated from high school. It's been over 50 years now. Taking over the family business was a natural thing for me, so I just did so. Our store was founded in 1937, after our founder worked at a house that disposed of products for the Japanese army and navy.
These days we primarily deal with goods from the U.S. military, but we used to also handle product disposals for the Japanese Army and Navy, National Railway, Postal Service and Police Service. 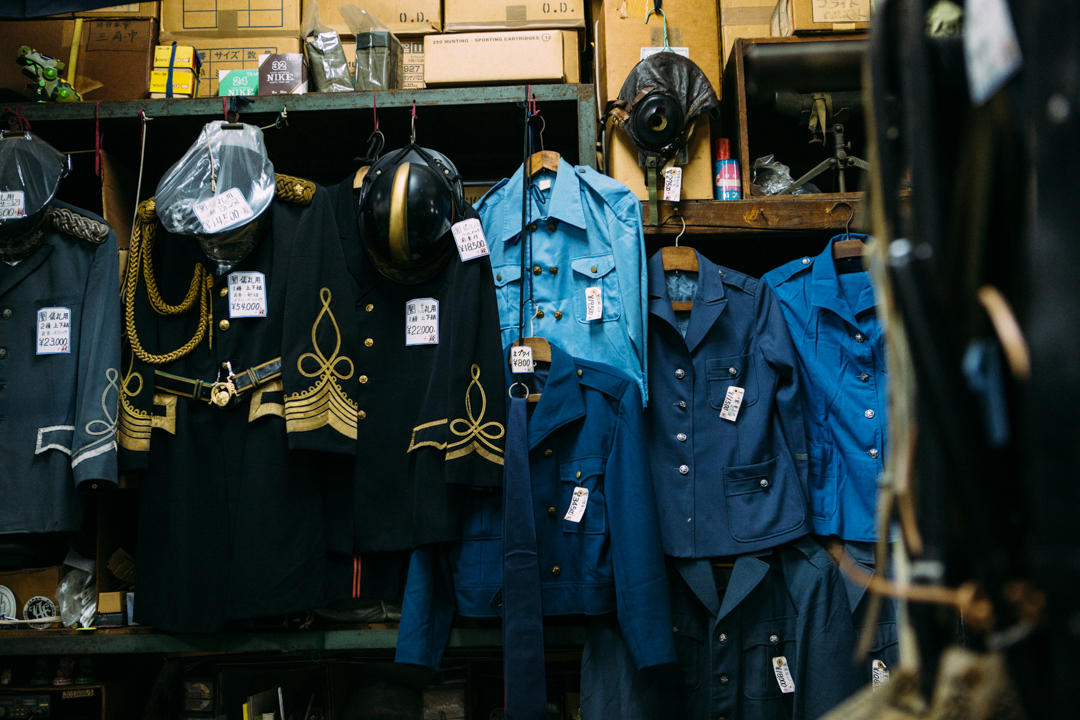 --Has your shop always been located here?

Before the war we were located in Fukagawa, but that shop was burned down during the war. After the war we were temporarily relocated in Asakusa, but then moved to Ueno around 1947. I was born in Fukagawa, and went to elementary, junior high and high school in the area. Three of my classmates from elementary school still live in the area. We visit each other's shops a few times a month. 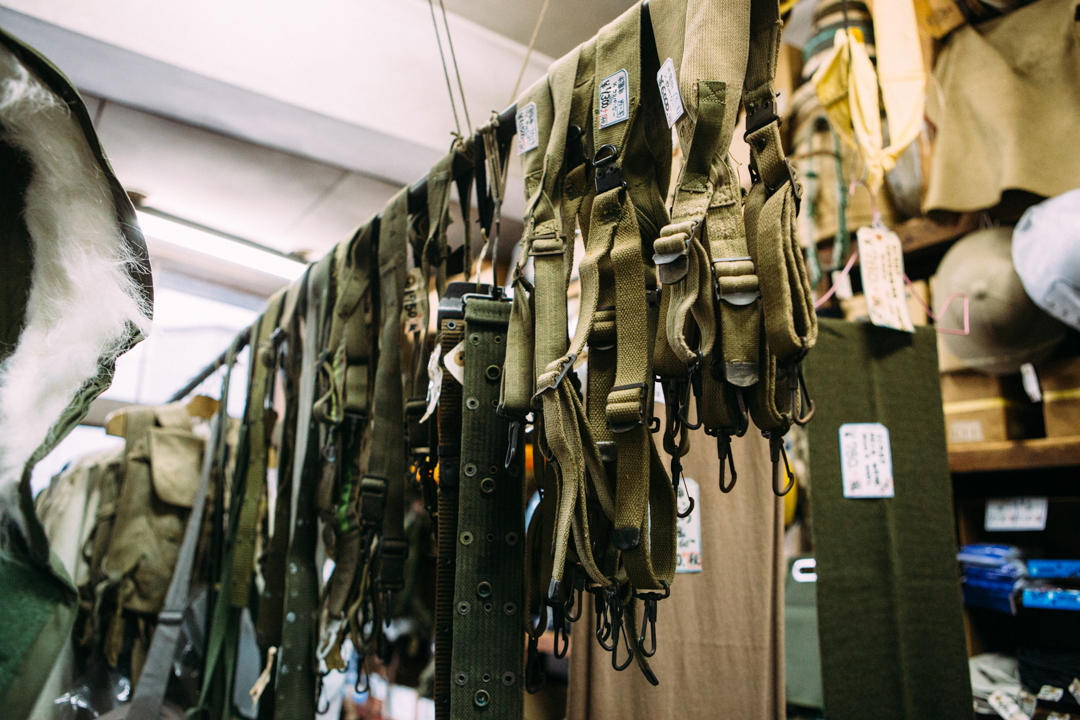 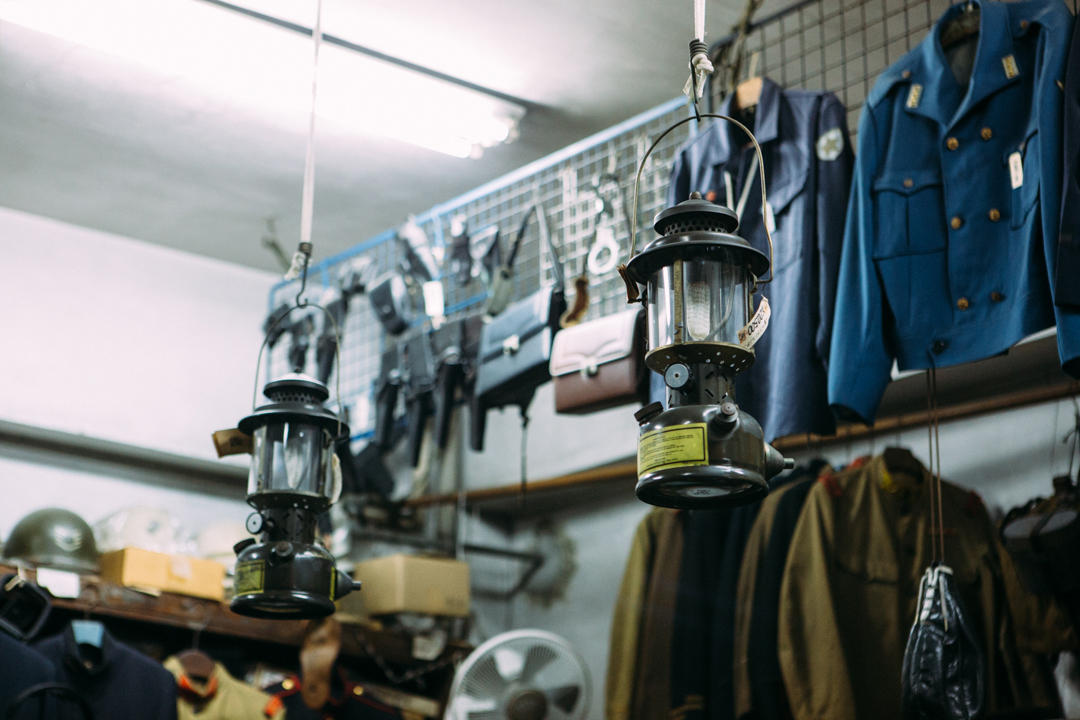 --Having watched over this street for so many years, what are some things you think have changed?

The number of stores have decreased, forcing me to close up earlier for the night earlier. I used to go out after I closed up the shop, but these days those the shops I used to go to have closed, so I don't go out anymore. The number of shops where locals can go keep decreasing as the people who run them grow older and close their establishments. There used to be a nice pub, right there, where I could always go to see people. There used to be many military shops like mine on Ameyoko street, but today there isn't a single shop that directly sources its products from the military. There are stores who source their products from a variety of locations unrelated to the military, though. 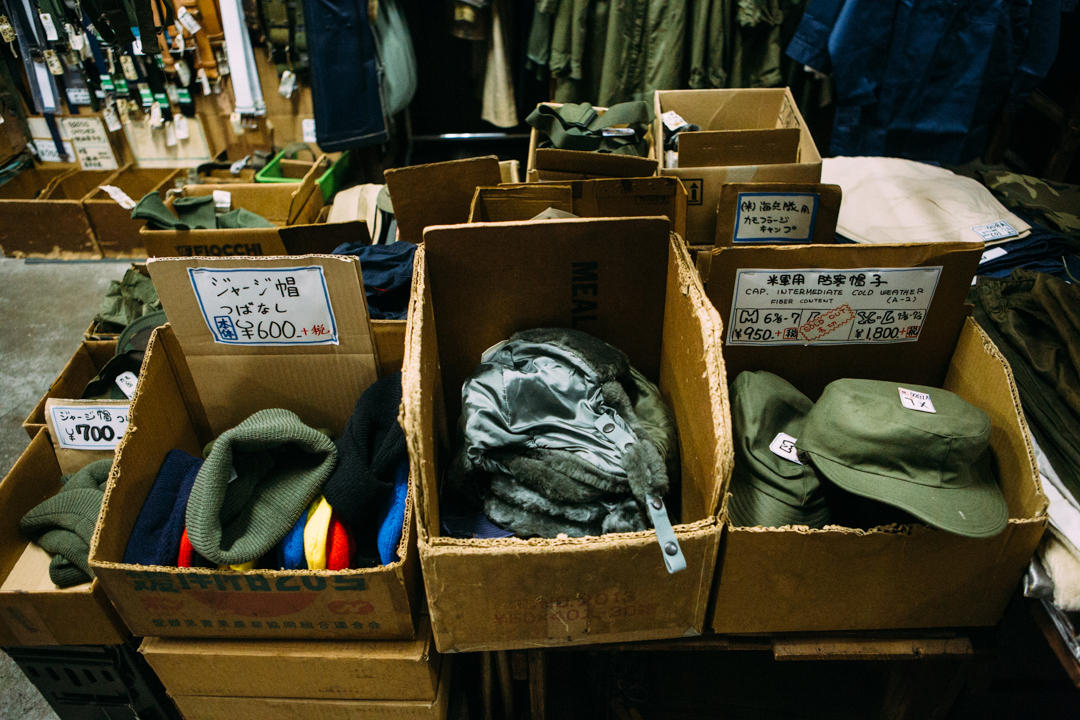 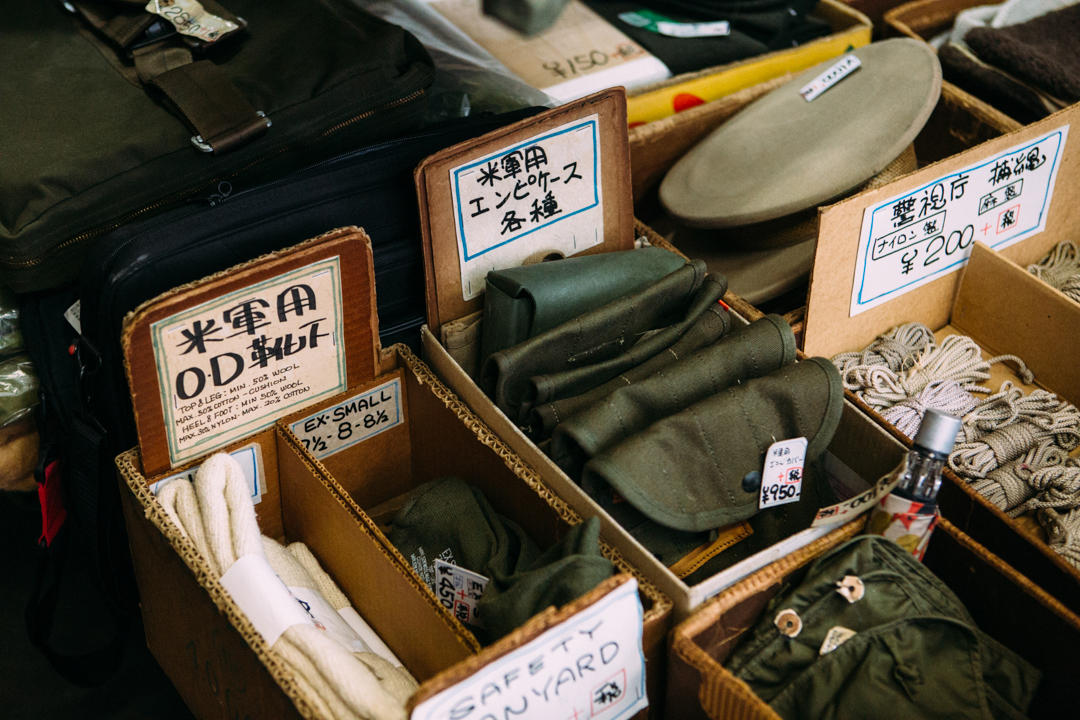 --What makes your work interesting?

You can say it about any sales business, but it's when you skillfully attain the product you're looking for for your store, that's what keep its interesting. And rather than thinking about just profit, I think about whether I can be a good salesman or not. 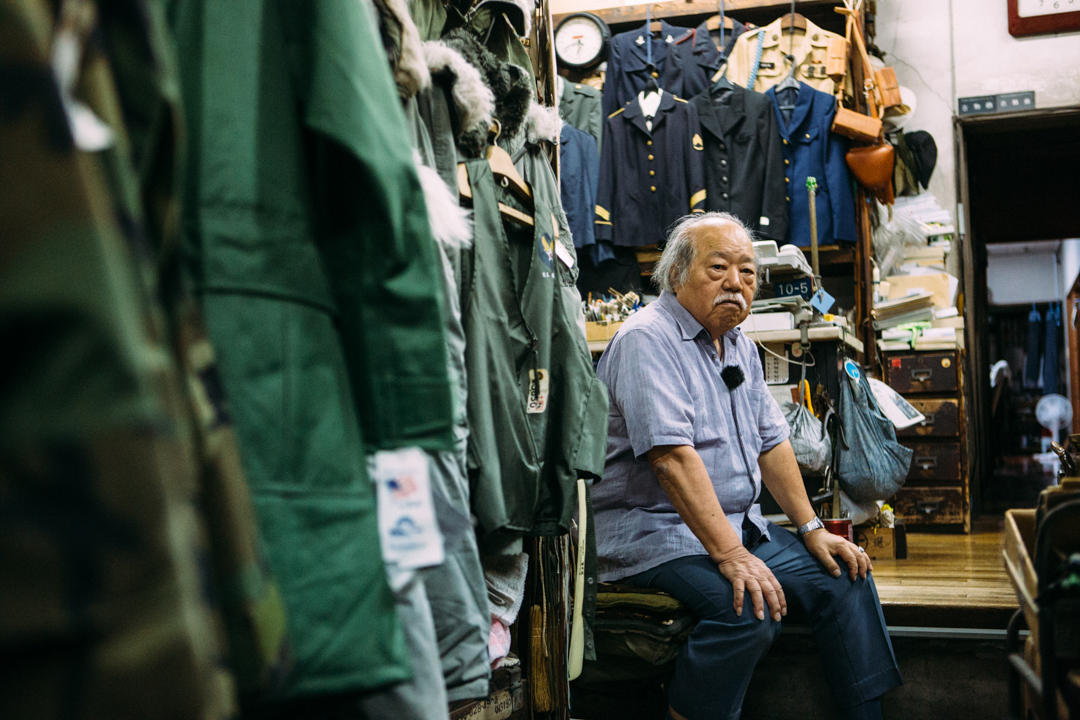 Established in Fukagawa, Tokyo in 1937, it relocated briefly to Asakusa and finally joined the Higashiueno neighborhood in 1947. Currently Matsuzaki's second generation owner Kazuo runs the store, beloved by military fashion fans from all over Japan. It is renowned for its authentic military items stocked directly by the U.S. military.
3-18-3 Higashiueno, Taito Ward, Tokyo
〉See on Google Map